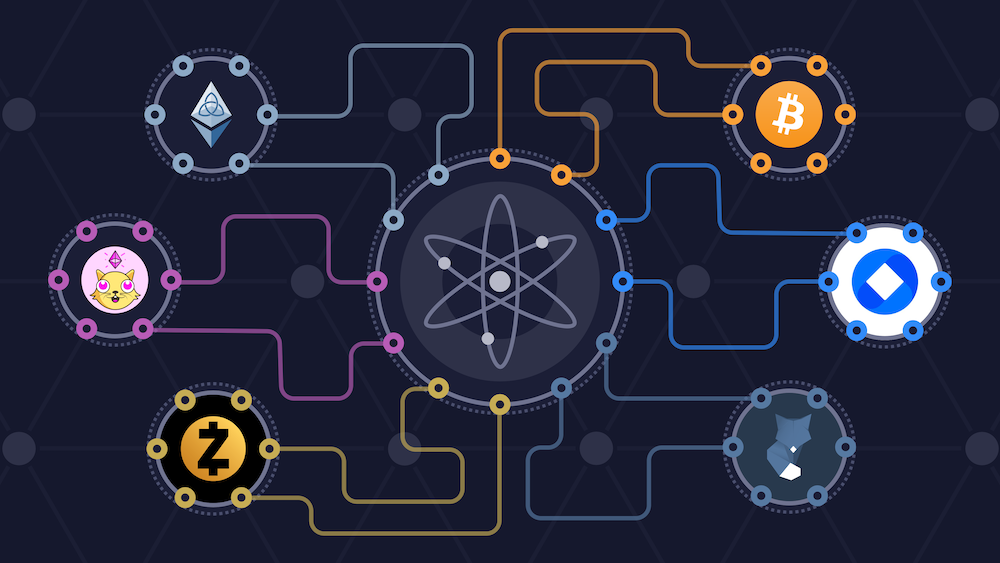 Cosmos is a network of interoperable blockchains. Cosmos uses Tendermint BFT which is PoS based consensus algorithm. Tendermint BFT is an open source platform and can be used by any project.

To create a network of blockchains Cosmos provides CosmosSDK (the application layer) and Tendermint SDK (the network and consensus layer) to give complete tools to launch a public or private blockchain. All the blockchains will implement IBCI (inter blockchain communication interface) so that they can transfer tokens and data between each other seamlessly.

The idea behind Cosmos network is to have horizontal scalability. Blockchains are distributed databases and need globally distributed nodes to store and maintain the state of the database. Everyone is allowed to write to the database in a secure way provided they follow the rules of the protocol. The consensus rules secures and maintain the globally accepted state of the blockchain but come at the cost of scalability.

Bitcoin solves consensus and security by using Proof of work (PoW ) consensus which puts a hard cap of 10 minutes per block. This limit along with probabilistic finality makes the Bitcoin transaction confirmation time to be around 60 minutes considering a 6 blocks confirmation. Finality is probabilistic because PoW follows the longest chain. To determine the longest chain you have to wait for the chain you are following to be longer than other competing chains.

Proof of stake (PoS) is another consensus algorithm which is much more energy efficient than PoW. Ethereum is now migrating from PoW to PoS. Many PoS chains are already live including CosmosHub. PoS does not solve scalability of blockchains. PoS needs validators to validate blocks and broadcast their vote for validity of the new block to the network. Communication between nodes is limited by physical laws (speed of transmission, packet size) which brings latency. To validate each block each validator communicates with the whole network so latency is proportional to nC2 where N is the number of validators.

On top of the network latency there is the time and cost of validating each transaction. Validating smart contract transactions can be expensive since each node has to run the whole code execution to determine the final state of the transaction. When targeting high TPS this can be a bottle neck because it will require nodes to have very good CPU configuration and low network latency.

Ethereum 2.0 (PoS based) is solving scalability by using using 64 shard chains. Sharding is a known method to horizontally scale the database. The block time in Ethereum will be 12s after migrating to PoS which is just .5s faster than the current block time of 12.5s. With 64 shards the transaction speed of Ethereum will be around 1000 TPS. With a variety of layer 2 solutions Ethereum aims to bring transaction speed to 100K TPS.

To support the global financial system it will take a lot more than 100K TPS. Cosmos network does not want to be limited by the TPS of a single blockchain. Cosmos network will have many blockchains which can communicate with each other. Each blockchain can use layer 2 solutions to scale itself. With no limit on number of blockchains connected to the network, scalability can be solved by adding more blockchains when existing ones are full up to the maximum TPS.

Cosmos network uses the hub and spoke architecture. The spokes are Zone blockchains which will connect to Hubs. Hubs will be used for inter blockchain communication, shared security and bridges to networks outside Cosmos ecosystem.

Cosmos network has value only when there are other zone blockchains which have implemented IBCI. Cosmos has very loose coupling with the zones. Each zone is an independent blockchain with its own validators and governance.

Using the CosmosSDK and Tendermint anyone can create a blockchain from scratch with its own set of validators. Cosmos network team has created a toolkit called Starport to create a new blockchain with a lot of boilerplate already created for you.

Cosmos has multi token fee mechanism which makes the user experience so much better and opens up the ecosystem. The validators can choose which tokens are eligible to be used as transaction fee. Validators having the most skin in the game will choose what is best for the users.

More sovereignty is a big step towards decentralisation. Any zone can choose not to participate in the CosmosHub IBC anytime.

A Hub in Cosmos network is used to connect zone blockchains using IBCI. Each hub is a blockchain itself and is independent from other hubs. A hub can add any feature as it seems fit for the benefit of users and the value of the native token of the hub.

Gia is the first Cosmos Hub. ATOM is the native token of the Gia hub. Interchain Cosmos team has released a roadmap for Gia version 2.0 which introduces many amazing features.

The Hub is central to the cosmos network. Cosmos Hub is responsible for connecting all the zone blockchains. A Hub is described as a port city from where the users can discover other zone blockchains and also access them.

Using IBCI users can manage tokens and do transactions using just their Cosmos Hub address and wallet. A single interchain account to operate the whole network of blockchains will be a game changer.

Atom is the native token of the Gia Cosmos Hub. The utility of the Atom is that it is necessary for staking and thus gives you the ability to earn the transaction fees and the block rewards of chains validated by the Cosmos Hub validators, which includes the Cosmos Hub itself as well as any hosted chains.

Cosmos Hub is connected to other blockchains called zones which support IBCI. Using IBCI tokens can be transferred from one zone to another. The fee for this transaction can be paid in zone tokens. This fee goes to the validators.

The transaction fee for interchain token transfers can be collected in any whitelisted fee token. Cosmos network validators whitelist the fee tokens via on-chain governance.

Cosmos allows each validator to choose relative value of whitelisted tokens to determine the fee of each transaction. The transactions with higher fees get included in the block first. The current mechanism will be replaced by the global fee ranking in which each validator will vote on the relative value of the tokens. This global list ensures soother and predictable experience when paying fees.

Cosmos Hub plans to enable creation of ERC20 like tokens. There will be gas fee associated with transfers and creation of such tokens.

CosmosHub will have various features like DEX, bridges, interchain token transfer, token issuance etc. All operations will have a transaction fee associated with it which will be earned by the validators.

Cosmos Hub will implement the Gravity DEX for trading of zone tokens. Proposed to use a hybrid model of order execution which uses both AMM and order books.

Batch execution of orders is proposed to avoid front running attacks. Orders will pooled for a certain blocks length to be executed together based on the ask price.

Gravity DEX will use equivalent swap price model (ESPM). In this model the swap price is matched with the open market price. To do this constant product does not hold true for the pool.

Gravity DEX will increase adoption of new blockchains in the cosmos network. Users will be able discover new tokens on the DEX and buy them instantly.

Gravity bridge will connect the Ethereum blockchain with the Cosmos Hub. Users will be able to transfer tokens between Cosmos and Ethereum using the bridge.

A smart contract on the Ethereum blockchain is used to interact with the Ethereum blockchain. Transactions on ETH side will be batched together for low gas fee per transaction. Low gas fee per transaction is a great incentive for users to use Defi apps via the gravity bridge. Performing swaps on Gravity DEX for ERC20 tokens will be much cheaper than performing them on ETH native DEX like Uniswap.

A zone blockchain can use the validator network of Cosmos Hub to validate its transactions. This is shared security. Validators will get rewards for securing the zone blockchain in the zone tokens.

Cross-Chain validation protocol is being developed by the Cosmos Hub team to allow validators to validate transactions of the “baby blockchain”. If the validator approves an invalid transaction on the baby chain their staked ATOM gets slashed on the parent chain.